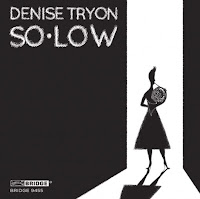 SO LOW
Denise Tryon, horn
BRIDGE 9455
ISBN# 0 90404 94552 6
Tryon's official website.
In 1989 Tryon graduated from the famed Interlochen Arts Academy and in 1993 received her Bachelor of Music degree from the New England Conservatory of Music (NEC) in Boston. She received the Presidential Scholarship while in the Artist Diploma Program at NEC.  She is known for her masterclasses in the US, Europe and Asia.   In 2009, Tryon founded Audition Mode, a yearly horn seminar, with Karl Pituch. In 2010 she was an International Horn Society (IHS) Northeast Workshop Featured Artist. This CD of mostly new works has some challenging works, but many with infectious rhythm and melody, and her sound is rich and creamy. 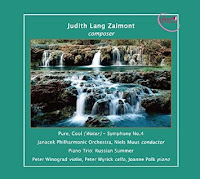 JUDITH LANG ZAIMONT
Symphony No. 4 "Cool Water"
and "Russian Summer" Piano Trio
Niels Muus, cond.
Janacek Philharmonic Orchestra
SOREL CLASSICS # 3
ISBN# 8 88295 33669 7
Zaimont's Official Site
More about the Sorel Organization
Lang has won many awards for her compositions and prestigious commissions.  The works on this CD are inspired by imagery of water.  She is a grantee of both National Endowments and a Guggenheim Foundation Fellow.  Zaimont is also a 2003 Aaron Copland Award winner and recipient of a 2005 Bush Foundation Artist Fellowship.  She has taught at several institutions including CUNY and Peabody Conservatory.  Her work is known for risk taking and music coloration. 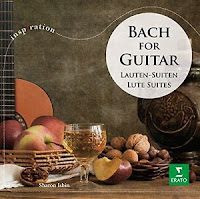 BACH for GUITAR
The Lute Suites
Sharon Isbin, guitar
ERATO # 75185
ISBN# 8 25645 17518 5
Isbin's official site.
Gift-Giver's Delight!  From the very beginning, Bach's lute suites have been played on other instruments.  World renowned guitarist Isbin joins the tradition with her usual sparkling virtuosity.  The combination of these timeless works and her artistry make this a great choice for gift giving (even for those who think they "don't like classical music"). Beautiful music for the holidays and on into the new year. 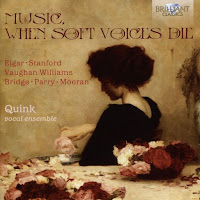 MUSIC WHEN SOFT VOICES DIE
Quink Vocal Ensemble
Music of Elgar, Stanford, Bridge, Parry,
Vaughan Williams & Moeran
BRILLIANT CLASSICS 95216
ISBN# 5 028421 95216 1
Quink's official site.
In keeping with our series focus on late Romantic era British composers this month, comes this CD of song cycles and individual favorites by many of our featured composers.  In 1983 Quink received its first international recognition when the group was named finalist in a major European music competition, and they have been going strong ever since (they tour the states twice a year).  Here, Elizabethan partsong settings by Vaughan Williams and Cycles by Moeran (Songs of Springtime) and Parry (Six Modern Lyrics) are set alongside traditional favorites sung by this versatile Dutch a capella group. 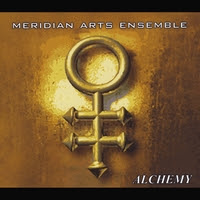 ALCHEMY
Meridian Arts Ensemble
8 BELLS # 6
ISBN# 7 00261 37354 6
Meridian Arts Ensemble Official Website
This all-male brass ensemble has created a diverse catalogue of recordings; original compositions from their own members, afro-Cuban and South American folk, Jimi Hendrix and Frank Zappa, & renaissance and baroque music.  They have performed around the world and won awards for their innovative programming and "high octane" performances.  This CD, with it's focus on traditional brass works of early and Baroque composers (Byrd, Corelli, Gabrielli, Bach and others) is another Holiday suitable CD that can take you into the new year with brassy confidence.