"Cinematic Visions of Love and Death" is our theme today on Just Opened, with releases that span the big emotions of romantic era solo & duo works, and the landscapes encompased by new concertos and guitar works. 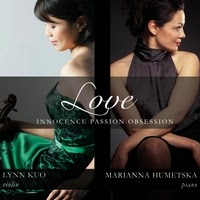 LOVE
Lynn Kuo, violin
Marianna Humetska, piano
www.lynnkuo.com
LKCD 0001
ISBN# 8 59711 48113 0
A beautiful mixture of works on this first release CD on this private label.  Violinist Kuo has a Doctorate of Musical Arts from the University of Toronto, and in addition to her solo work, is Chef d l'ensemble of Les Amis - a group that has toured Europe.  She has recorded works of Nino Rota on the Naxos label. 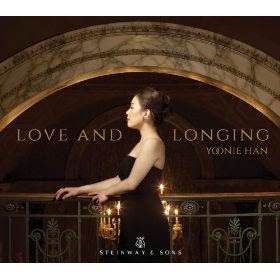 LOVE AND LONGING
Yoonie Han, piano
STEINWAY & SONS 30030
ISBN# 0 34362 30030 3
Available digitally and on CD
http://www.yooniehan.com/
My Delight of the Week.  South Korean pianist Yoonie Han has won top prizes in international competitions and accolades for her poetic and sparkling performances.  She made her debut with the Seoul Philharmonic at age 13, and has now performed around the world in major venues.  She has a bachelor's degree from the Curtiss Institute of Music, masters from The Juliard School, and is completing her Doctorate at SUNY Stony Brook.  She explores an unusual grooping of Romantic works inspired by Wagner's Liebestod, with works by Schubert, Hahn, Gluck, Prokofiev, and Granados.   Moving and accessible. 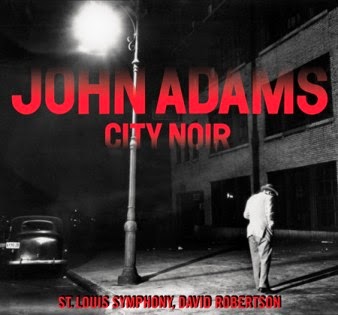 CITY NOIR
John Adams, composer
David Robertson, cond.
St. Louis Symphony
NONESUCH 541356
More information on City Noir & Saxophone Concerto
These two works by modern composer John Adams evoke the sound world of gritty late 1940s - 50s film noir.   The moodiness and sudden shifts of film score are built into the soundscape of these modern works.  For the Saxophone work, do not think the smooth stylings of love ballads, but more like the extended, sonically jerky improvizations of Gillespe... translated to the saxophone.  Much like a film score, these present a dark sonic world.

DOLCE VENTO
Chris Broom, composer
Patrick Jonsson, arranger
James Shearman, cond.
Thomas Gould, orchestra leader
www.chrisbroommusic.com
Unusual for our Just Opened program, we present a CD that is a the musical equivalent of a composer and arranger postcard.  Two versions of one short work, one vocal, one instrumental.  This is the kind of CD sent out to drive people to the composer's website to learn more about him and hear more of his work. 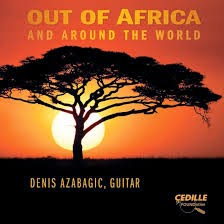 OUT OF AFRICA
and Around the World
Denis Azabagic, guitar
CEDILLE 7005
ISBN# 7 35--- 70052 8
More information on this release.
Multi-award winning guitarist Denis Azabagic invites listeners into a realm where world, folk, and classical music intersect on Out of Africa . . . and Around the Word, the Bosnia-born, Chicago-based virtuoso’s first solo album on Cedille Records.  Showcasing works by living composers, the album takes its title from American-born, British-based composer Alan Thomas’s evocative Out of Africa, inspired by the Karen Blixen memoir and movie of the same name. Thomas weaves together strands of African singing styles, scales, and rhythms, while paying homage to African string instruments, such as the kora and the oud.  An audience favorite is "Cafe Pieces" by Vojislav Ivanovic.

We hope you enjoied these!  Join us next week for more new releases, Just Opened.
Kara Dahl Russell